About 1% of breast cancer cases occur in men. The Lemonade Fund received our first application from a young man, S., in his early 30’s, from a community in the north. Sadly, S. has had a recurrence of an earlier bout with breast cancer. In 2006, when he was first diagnosed, he was treated and subsequently went on with his life. This time, S.’s cancer is aggressive and has metastasized to his bones. S.’s wife left him and he is debilitated and currently living with his parents. His social workers report that he is severely depressed. His parents are trying to help him but they are older, and the situation is obviously very hard on them as well. S. is too sick to work and his parents live on a fixed income. There are many additional expenses caused by S.’s illness, and the Lemonade Fund awarded him a grant to help S. and his parents financially, during this difficult time. We pray for his recovery.

May 12, 2014 – Lemonade Fund Women’s Health Awareness Evening (in English, for women only.)

Profiles in Courage and a Passover Recipe

Friends of the Lemonade Fund:
Been out of touch but very busy! The Lemonade Fund,www.lemonadefund.org, has been helping Israeli women with breast cancer at an increased pace since our last update. The following are profiles of some of the women who have received grants:
O., 37 years old, married with five children, ages 2-14, from the south. Recently diagnosed with breast cancer, O. had to take a leave of absence from her job as a kindergarten teacher while she undergoes chemotherapy. Her husband has had to take significant time off from his job to help care for O. and their children, and they are beginning to have trouble paying their bills. The Lemonade Fund was created to help families such as this; families that are hardworking and solvent, but who are pushed into financial crisis due to serious illness. It is our hope that our grants assist families with these temporary hardships while they recover physically, until they can get back on their feet.
D., 30 years old, separated with two children, ages 2 and 7, from a city in the south. Her disease was diagnosed at an advanced stage and D. is getting chemotherapy to shrink her tumor prior to having surgery to remove it. After this she will need weeks of radiation treatments. Unfortunately, D. has no contact with her extended family and she gets little help from her former husband. She needs extra help and is now in severe financial distress. One of the things most important to D. is that she wants to be sure that her son, who recently started first grade, has enough clothing and books for school. The Lemonade Fund awarded D. a grant and we pray for her recovery.
The Lemonade Fund is also now, thanks to amazing volunteers, supplying home-cooked meals to two single Mom’s in the Sharon area who are having chemotherapy.
We are a simple charity. Money that comes in goes directly to women who have passed the application process. Apologies that we do not have fancy printed material or events, but know that the money that you donate goes straight to our recipients. Breast cancer in Israel is now striking 1 in 7 women. Please help us help these women.
And best wishes for a healthy, meaningful Passover!
Shari 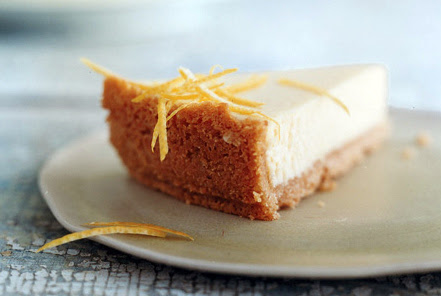 Almonds and matzo cake meal make a wonderfully textured crust for this refreshing, citrusy cheesecake. After Passover, instead of pulling out the graham crackers again, experiment with other cookie crusts such as one made with shortbread.

Make crust:
Preheat oven to 350F with rack in middle.

Pulse almonds, sugar, matzo cake meal, and salt in a food processor until finely ground. Transfer to a bowl and stir in butter until combined well. Press onto bottom and 1 inch up side of springform pan. Bake until crust is firm and a shade darker, 12 to 15 minutes. Cool crust completely in pan on a rack.

Beat together cream cheese and sugar in a bowl with an electric mixer at medium speed until smooth, 1 to 2 minutes. Reduce speed to low and add eggs 1 at a time, mixing until incorporated. Mix in zest and vanilla.

Put springform pan in a shallow baking pan and pour filling into cooled crust. Bake until filling is set 1 1/2 inches from edge but center is wobbly, 45 to 50 minutes (filling will continue to set as it cools). Transfer cake in pan to a rack and immediately run a knife around edge, then remove side of pan. Cool completely, 2 to 3 hours.

cooks’ note:Cheesecake can be made 2 days ahead and chilled, loosely covered.